The 21st century is likely to be the most eventful century in human history. This coming decade will set many of its long-term trends and determine whether we thrive as a planet or collapse into ruin. Either way, a new world is about to be born.

That new world can't come too soon for the current one doesn't work for most people and the situation is even worse for all the non-human beings caught within its web. In short, we have less than a decade to create a new civilization. Which means everything has to change: business, relationships, tastes, beliefs. Everything.

Many people are overwhelmed by dramatic transformation. I embrace change even as I suffer from it like everyone else. That's the reason for Twentitude.

Perhaps the single biggest transformation is the fundamental relationship between humans and the non-human world. I hate to say the term 'nature' since that has the connotation of a uniform substance, when in reality the nonhuman is infinitely more diverse than the human.

We have much to unlearn, to replace our anthropocentric language of 'history' and 'society' with terms that include the many beings that aren't human. Arguably, the first unlearning step is sensory, of toppling vision from its perch at the top of the hierarchy of knowledge. Consider how we talk about things we see versus things we hear or smell.

But we don't treat vision that way; the 'seen' drum is the drum itself, not the way the 'drum looks like to me.' As visual creatures we easily fall into the trap that vision reveals objects as they are - fixes them in our gaze, making them available for classification and control - while the other senses play supporting roles in this visual drama. After vision comes hearing, which has less prestige than vision but still plays a major role because of its close association with language and music.

With this issue, I am going to inaugurate an exploration of the 'minor' senses: smell, touch and taste, senses that are opaque to conceptual elaboration for now.

There will continue to be a regular dose of random things that catch my fancy. 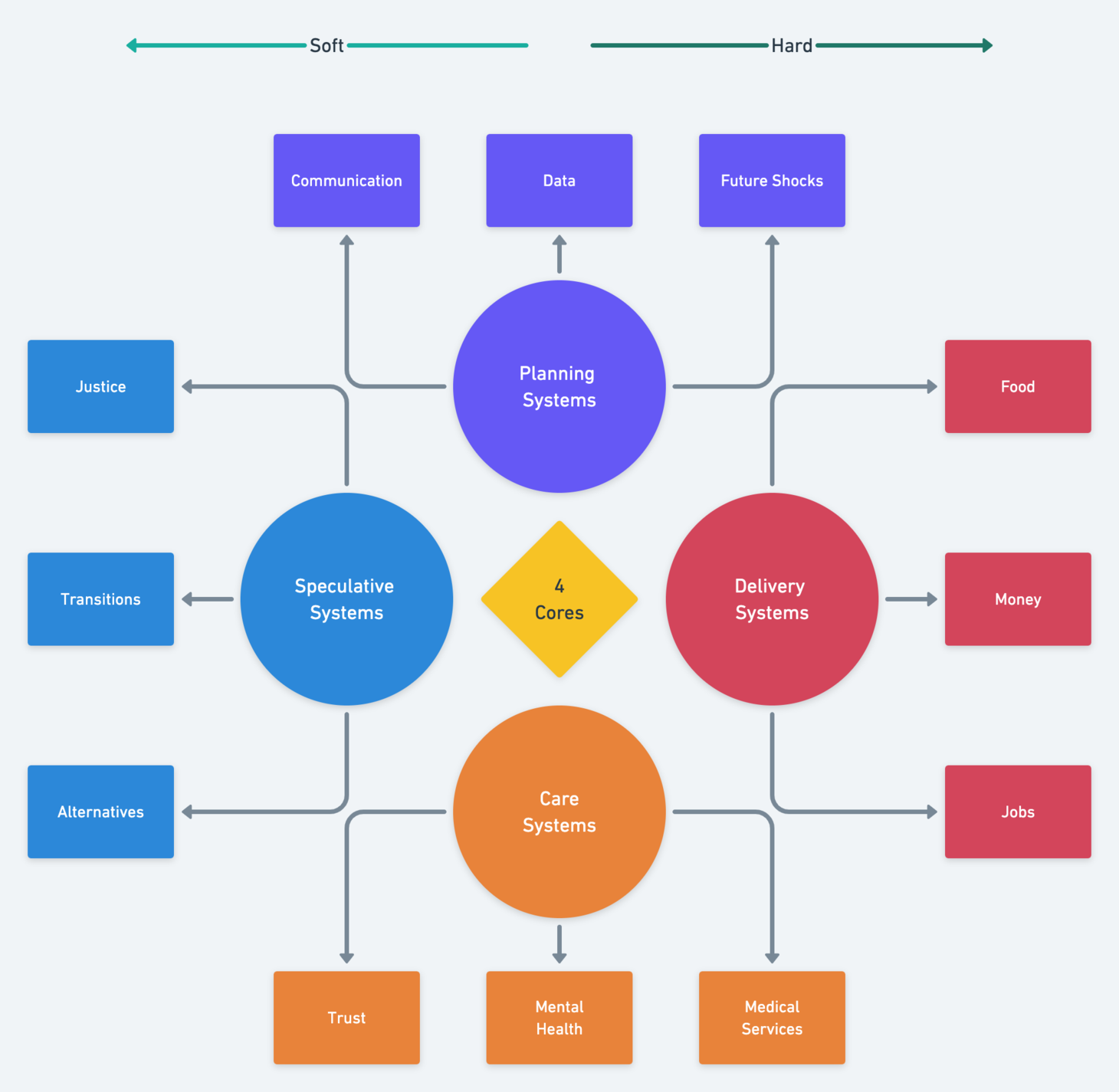 Systems we need in the near future

A quick sketch of four core systems we need to thrive in the 2020s.

My whole life has been riddled with conflict. I’m caught up in a war not of my own making, and must be combat-ready at any time. Or so it seems, to my disquiet, whenever I hear about my immune system: my days appear placid, yet under the surface my body seethes with threats and counter-measures.

The need to touch

Touch is the first sense by which we encounter the world, and the final one to leave us as we approach death’s edge. ‘Touch comes before sight, before speech,’ writes Margaret Atwood in her novel The Blind Assassin (2000).

Seems strange to include an article about venture capital in a newsletter about flourishing, but business does impact our lives whether we like it or not. Especially in a year where the tech giants have grown even bigger and more powerful than they were before.

Inside the Paradise Bubble

Taiwan’s response to COVID-19 has been incredibly effective. How much of its success comes down to technology? “Taiwan is a paradise bubble,” my dad told me in March, during my first few days back at my parents’ home.

I like the emerging discipline called design fiction. It's traditionally focused on future products, but why not future societies?

The year is 2023. The COVID-19 pandemic has come to an end, and the global economy is on the path to recovery. How did we get here? How did our economy and society evolve to overcome the greatest crisis of our age?

How I Rewired my Brain to Become Fluent in Math

Clickbaity title but has some useful pointers about learning math as an adult, which might come in handy if you're an adult trying to learn a new skill of any kind.

We are all knowledge workers now, for every single one of us receives hundreds of emails, social media updates, Whatsapp and Snapchat messages and myriad other sources of information (including this newsletter 😬).

We need a way to organize all this information. Luhmann's Zettelkasten method has gone from being an academic curiosity to Silicon Valley star. Want to know more about creating Zettelkastens? Read this article.

The decisions we make during the 2020s will impact us for centuries and arguably determine whether we survive as a species. Thoughtful and creative decisions won't happen on their own; we need to train ourselves to hear the muse's whispers. Twentitude is a receptive state of mind which helps us hear the future.